Bumps under my eye?

Posted on August 8, 2015 by Charlene Gerogosian 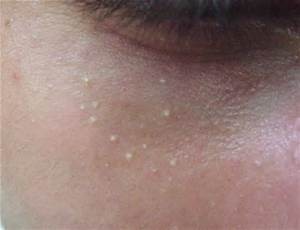 I get asked all the time about small flesh colored or white bumps under the eye. There are different causes and treatments.  Fortunately some can be treated easily in the spa during your facial, however others will have to see their dermatologist.

Cholesterol deposits are called xanthelasmas. Though I always recommend that you have your cholesterol checked, often your cholesterol will be normal. You should have it checked however as it is something that is treatable.

Whether you have a high cholesterol or not, if you are predisposed to getting xanthelasmas, they may recur, though not necessarily in the same location.

The only treatment that will effectively remove cholesterol deposits is surgical excision.  This is a simple procedure that can be done in the dermatologist office with just a numbing injection.

In general prevention consists of not using thick greasy ointments and using a retinoid such as Retin-A.

Milia are commonly found on the skin of people of all ages. They are formed when keratin (a substance produced by the skin) becomes entrapped beneath the outer layer of the skin, forming a tiny cyst. An individual milium (the singular of milia) is formed at the base of a hair follicle or sweat gland.

Milia can be categorized as either primary or secondary. Primary milia are formed directly from entrapped keratin and are usually found on the faces of infants and adults. Secondary milia are also tiny cysts and look similar, but these develop after something clogs the ducts leading to the skin surface, such as after an injury, burn, or blistering of the skin.

Milia can occur in people of all ages, of any ethnicity, and of either sex. Milia are so common in newborn babies (occurring in up to 50% of them) that they are considered normal.

Secondary milia may appear in affected skin of people with the following:

Milia appear as 1–2 mm white-to-yellow, dome-shaped bumps that are not painful or itchy.

The most common locations for primary milia include:

The most common locations for secondary milia include:

Although milia are found in the outer layers of skin, they are difficult to remove without the proper tools. Do not try to remove them at home, as you may leave a scar.

Primary milia in an infant, no treatment is necessary, as the bumps will go away on their own within a few weeks.

Primary or secondary milia in an adult may disappear on their own, but you may be treated with one of the following:

This entry was posted in Uncategorized. Bookmark the permalink.